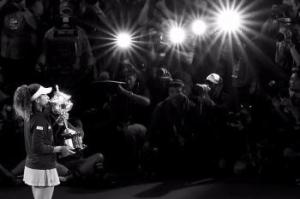 Naomi Osaka wins her consecutive Grand Slam against Petra Kvitova 7-6(2) 5-7 6-4 to become the first Asian player ever to reach the World No. 1, and the second woman in Australian Open after Li Na's victory in 2014. After an epic three-set thriller, the Japanese proved the world why she deserved the title more than ever, especially considering her expontential growth over the past year. Naomi had no tour titles and came here unseeded as ranked 72nd in 2018's draw.

Retreat? Can't relate. Both women produced their best tennis and put their heart and soul in Rod Laver Arena to take the Daphne Akhurst trophy to home, but it was Naomi Osaka who fantastically remained calm after the second-set rollercoaster and showed the world why she earned her name written in the books of history. The Japanese stormed in the first set and didn't let the Czech to break her serve despite seeing break points, closing the first set in tie-breaker by 7-2, though Petra's fighting spirit has not shown a sign of weakness at all to lead the second set 2-0; breaking Naomi's serve for the first time. It didn't take too long for the US Open Champion to elevate her game and even the scores at 2-2, later 4-2 in the lead, after turning Petra's unforced errors into her advantage and earned three Championship points at 5-3 (40-0) to close the tournament. Welcome to the rollercoaster: Osaka fails to get a single point and Kvitova recovers with her two winners and her opponent's unforced error to even it at 5-5, and a double fault at Osaka's serve gifts her the second set. Naomi, in all tears, probably realizing the chances going in waste in blink of an eye, leaves the arena to take a break and start the deciding set anew.

The deciding set is how I'm one-hundred percent convinced Naomi is the perfect 'Champion' the WTA needed as the next generation for so long. It isn't all about the physical state of the body that demands playing long sets in such an offensive style, it is the mentality that you go on to win a Grand Slam after losing a set down from three match points and continue as if it didn't happen. You erase it from your memory, you don't live with the past. You refresh yourself, start a new chapter and own it. Breaking Petra in the third game 2-1, she solely focused on her game, kept her Pokerface, and didn't drop a single service game to conquer her successive slam. Her footwork and forehands were better than Petra, had 6 less unforced errors and equal winners, had relatively 20KM/h faster serves whereas Petra was much more efficient in backhands, dropshots, lefty-wide first serves and overall second serves. If only one mistake a viewer could see behind the screens, that would probably be Naomi's trying to handle Petra's second serves deep inside the baseline, clearly knowing she never falls short on her serves, so wondering if it was a pre-match decision by the coach Sascha Baijin to take her balls as early as she can to hit deeper shots or Naomi's instinct.

It was a terrific final showdown contested by both ladies, regardless of the result. Probably the best finals match I've seen since Ostapenko's major domination and comeback over Halep in Roland Garros '17. Have to say I was siding with Naomi since she won the first set and especially after losing the championship points to finish it once and for all in the second set, although I would still be as happy as I am if Daphne was risen in Petra's hands and cannot wait for her to keep her level to win at least a major this year. Wimbledon calling for the third time? Perhaps. With Naomi winning her back-to-back Grand Slam in Australian Open, she is now the youngest woman to reach the top-ranking after Caroline Wozniacki's achievement in 2010.