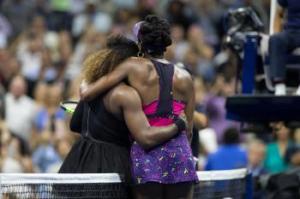 Serena Williams has shown no sign of weakness in beating sister Venus Williams 6-1 6-2 to move on to the fourth round. Serena confirmed that their match was the best she played since her return to the professional tour. Her opponent will be the Estonian Kaia Kanepi, who beat Simona Halep in the first round and shook the audience.

The match was sisters' 30th match in their career with Serena leading 17-12 in their head-to-heads. However, it was Venus Williams who won their last match in Indian Wells 6-3 6-4 in third round — the tournament Serena Williams officially returned back to tennis. The match prior to that was the retro-final of Australian Open 2017 where the younger sister beat the older 6-4 6-4 to reach her 23rd Grand Slam while being pregnant for eight weeks, also.

Serena immediately stepped up her game in the very beginning of the match to be the dominant force, else she knew Venus could have taken over if she would hand the chance. The issue with Venus was, she failed to convert the important points to her scoreboard; especially the break points. Once Serena took the second game, she didn't look back and didn't give Venus chance at all to near her service games. Venus' 18 unforced errors compared to her unusual 14 winners was her weak point while Serena scored 34 winners to 22 unforced errors. In overall, Serena closed the match 25 points ahead of Venus; 69 to 44.

The sheer dominance of Serena should scare her opponents, although her next round opponent, Kaia Kanepi, is also going to be a tough challenge to overcome. It should be noted that the sisters play very well against each other, but it wasn't Venus' day unfortunately to provide a long-lasting match. Serena will play on Sunday for her next round match to make it to the second week of the US Open.