Sharapova Dispatches Ostapenko in Third Round 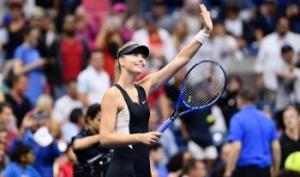 Continuing on 22-0 Arthur Ashe night session record, the Russian Maria Sharapova dispatched the Latvian Jelena Ostapenko home in straight sets; 6-3 6-2 in the third round of US Open. Sharapova will meet Carla Suarez Navarro, whom she has a record of 4-1, in the fourth round on Monday.

In the battle of two Grand Slam champions, Maria Sharapova took the early break to lead the set in blink of an eye at 5-1, however couldn't turn the set points into success and let Ostapenko score two more games in the scoreboard before dropping her serve to love at 5-3. Both women seeked to break the opponent's serve with their hyper-offense technique, as neither Sharapova's nor Ostapenko's serve are considered as a big threat in their game. The stats show that neither women managed to win their second serve more than 30%, but the difference was Sharapova's excellent 78% win from her first serves compared to the Latvian's 43%.

From my personal point of view, the match could have gone to the third set like their match in Rome unless Ostapenko hit too many unforced errors since the beginning of the tournament. The Latvian scored a giant 41 unforced errors compared to her only 10 winners; a number that we rarely see from Ostapenko on the winner side while Sharapova balanced the number with 18 to 11. The intolerable mistakes from Ostapenko costed the match as Sharapova finished the match 20 points ahead of her opponent; 69-49.

With the win, Maria Sharapova improved her already-flawless night session record to 23-0. Her opponent, Carla Suarez Navarro, whom the Spaniard beat Caroline Garcia in three-set thriller 5-7 6-4 7-6(4) is next. The match-up seems to be in favor of Maria as she lost to Garcia twice in 2018 season with the recent one coming in Montreal so, she is relatively going to have higher odds against the Spaniard than to the French. Maria Sharapova and Carla Suarez Navarro will play in the second week of the tournament, on Monday, although the schedule has not been released as of yet.