Women's Semi-Final Predictions: Who Will Triumph? 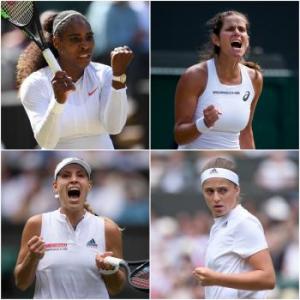 Today is the women's semi-final day in Wimbledon. The first match of today will feature the 12th seed Jelena Ostapenko taking on 11th seed Angelique Kerber as the first match in Centre Court, followed by odds-favorite Serena Williams against No. 13, Julia Goerges. Despite the moral of the story will be the same, the accomplishments will be different. Jelena Ostapenko and Angelique Kerber, Grand Slam champions, will fight for a spot in the final to capture the Venus Rosewater throphy for the very first time in their career and add Wimbledon to their resume. Julia Goerges, who made into her maiden semi-final, will look forward to tackle Serena to reach her best result, a final round, to fight for a maiden-slam victory. Serena Williams, however, has already won Wimbledon seven times before and is aiming to complete a successful return back to the tour after giving birth to her first child, Olympia, less than a year ago.

It will be the first time Jelena Ostapenko and Angelique Kerber play in a tour event, while Serena Williams have already beaten Julia Goerges three times before, with the previous Grand Slam, French Open, being very recently. The American dispatched the German in straight-sets, 6-3 6-4, out of the tournament in third round. However, clay and grass are terrains that are completely contrary to each other, thus both Grand Slams have seen many/(or-)different surprise names reaching the last rounds. Grass suits the offensive gameplay, hence underestimating Goerges' technique against Serena despite the recent loss would be an understatement. The same case applies for Jelena Ostapenko, an extremely offensive player, against a counter-puncher like Kerber.

The formula of grass in a short description would be as follows: The ball accelerates upon its contact with the surface and almost doesn't elevate at all, so that the opponents can't find an appropriate time to position and return back. For that reason, rallies don't last long in grass and is the primary reason why offensive players benefits from the surface more than any other players, unless you're a serve-volley player. That is why I believe Ostpaneko and Serena, despite both potentially struggling to finish in straight-sets, will emerge victorious to book their tickets in Grand Final on Saturday.