Wozniacki Surges Into Her 30th WTA Title in Beijing 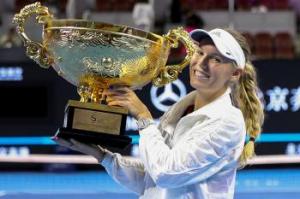 Caroline Wozniacki has reached her 30th WTA career title in Beijing, beating her Latvian opponent Anastasija Sevastova in straight-sets, 6-3 6-3. The Dane seem to be enjoying her well-spent season, especially after conquering her maiden-slam in Australian Open 2018. And so far, her year-to-date earnings from the tournaments hit $5.7M.

Caroline almost sweeped all of her opponenents without losing a single set to claim the victory, which reminded me her perfromance in Australian Open. She beat former Top 10 player Belinda Bencic in the first round 6-2 6-3, Petra Martic in the second round 7-5 6-3, Wuhan runner-up Anett Kontaveit 7-5 6-4 in the third, qualifier Katerina Siniakova 6-2 6-2 in quarters, and Chinese No. 1 Guangzhou champion Qiang Wang 6-1 6-3 in semis to set up the clash against Anastasija Sevastova. Her consistency was on-point and it is only better for Caroline to become a huge threat to her opponents for the future titles, as well as for the titles she has to defend: WTA Championships in Singapore and Australian Open 2019 where the eyes will locked on her.

With Caroline reaching her 30th WTA win, she is only six away to catch up on one of her fierce rivals, Maria Sharapova. However, the Russian has shown no signs of activity in Asian tour and will not be participating Tianjin as the defending champion. Maria has, also, skipped important titles such as Wuhan and Beijing, and seem to prioritize promoting her own candy-brand Sugarpova.

Caroline earned 1000 points as Beijing champion and further strengthened her position as World No. 2, now sitting on 6490 points, which is 1190 ahead of Angelique Kerber as World No. 3.