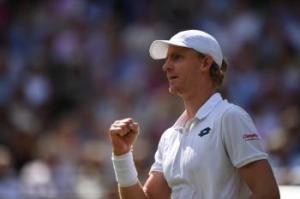 Roger Federer had many opportunities to close the match, however got knocked out by Kevin Anderson in a five-set thriller to put his dreams on the shelf until next year for running the 9th title here in Wimbledon. The Swiss, often referred as King of Grass, was leading 2-0 in sets, 6-2 7-6(5), and had a match point in the third, but the South African managed to find a way to emerge the victory 2-6 6-7(5) 7-5 6-4 13-11 to reach the last four.

Kevin Anderson was not willing to give up today, especially after an unexpected and disappointing loss against Diego Schwartzman in Round 16 of French Open. The South African had the advantage 2-0; 6-1 6-2, against the Argentinian until his mental state went topsy-turvy and lost the match in a very similar fashion; losing in five-sets despite being in 2-0 lead. However, today did not seem to be the repeat of the same case. Anderson, having his best career ranking result in 2018 and displaying the same effort on tour events since the past year; most recognizably being the runner up of US Open last year, seems to level up his mental state to become a strong contender in Top 10 at the moment. I am impressed with his condition in overall, both physically and mentally.

The victory today was not only deserved, but came with a big reward for Anderson as he will be playing his first semi-finals in Wimbledon. His opponent will either be Milos Raonic (13), former runner-up here in 2016, or John Isner (9), the current Miami Open Champion. On the bottom of the bracket, Novak Djokovic is waiting for his semi-final opponent as Rafael Nadal and Juan Martin Del Potro exchanges sets and tied 1-1.