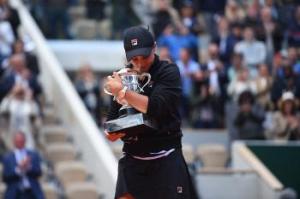 It's been a phenomenal two weeks for Ashleigh Barty, who only came here with two wins in the clay court season and considers the clay as her least liked surface. The Aussie, known to be a prodigy when he won the Junior's Wimbledon title, left the game in 2014 in order to focus on cricket; stating she didn't like the constant pressure of the game. Returning back in 2016, the Roland Garros Champion says it was the best decision she made in her life.

It also happens to be Ashleigh's maiden slam; she has never seen a single semi-final before in any of the four. However, 2019 in overall is a fantastic season for her; claiming her first ever WTA Premier Mandatory title in Miami, as well. Still, Chris Evert, the 7-time Roland Garros Champion and 18-time in total, states she put at least 8 other women in favorite to win the title before her in the first day of the tournament. And, she wasn't wrong by saying that: Naomi Osaka, Petra Kvitova, Kiki Bertens, Simona Halep, Sloane Stephens, Serena Williams, Garbine Muguruza and many more were either beaten in the earlier rounds or forced to retire due to injury; leaving the draw completely vulnerable. By the time we reached semi-finals, two teenagers Amanda Anisimova (17) and Marketa Vondrousova (19) didn't drop a single set.

While talking about Anisimova, it'd be important to mention she had every chance to set a teenager final, but couldn't seal the deal. She was 0-5 and 15-40 in the first set against Barty and came back to win the first set 7-6 and by the time she was leading the second set 3-0, she didn't drop a 'single' point; leading 16-0 in the last points. Barty however, kept her composure and reached the finals 6-7 6-3 6-3. On the other hand, Marketa Vondrousova, the Czech teenager is having a great season so far: She made to the Budapest and Istanbul finals where she lost to Alison Van Uytvanck and Petra Martic respectively. She beat Simona Halep twice in Indian Wells and Miami to make it to quaters and also played quarters in Rome, losing to Johanna Konta. Upon coming to the finals, she beat both Martic and Konta in a row.

If I'm being honest, the finals felt underwhelming. Barty was calm and collected all the way through and executed her all-court style tennis perfectly to identify Marketa's weakness to have early lead and never looked back. In an hour and eleven minutes, Ashleigh Barty ended the drought and became the first Australian Champion after Margaret Court. She is now the #2 in the rankings and earned $2.6 million paycheck.