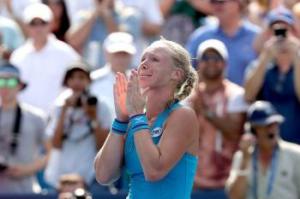 Kiki Bertens, the World No. 17 but unseeded here in the draw, stunned Simona Halep after saving a championship point in the second set's tiebreak to win her very first premier title in Cincinnati 2-6 7-6(6) 6-2. As with the title, the Dutch leaves the tournament with 900 brand-new points on hand and achieves the best-career ranking result to sit on the 13th seed next week.

Simona Halep was just a point away to capture the title and win both Toronto and Cincinnati in a row, but failed to use the opportunity as Bertens saved the championship point with a strong second serve to force an error. Despite being weak in the first set, Bertens was up ahead 4-1 against Halep until the Romanian's endless fighting spirit came back from the dead to even the set at 5-5. Unfortunately, no sign of the Halep we know was present in the third set which made me a bit worried if we were ever to experience a situation she had in a match with Jo Konta back in Miami 2017, where she was about to part ways with her coach due to her aggresive and pessimistic approach for giving up on match. My worries turned into a sigh of relief as Halep graciously accepted defeat and congratulated her opponent for her first premier title.

It would be absolutely unfair to not to talk about Bertens' accomplishments over the week, however. Kiki Bertens beat the former Top 20 player and semi-finalist of Australian Open and US Open last year, Coco Vandeweghe, 6-2 6-0 in the first round. Her next round opponent was the world No. 2 Caroline Wozniacki, but the Dane retired from the match due to her left-leg injury in the second set while she was down a set 6-4. Kiki Bertens put up a great fight against Anett Kontaveit in third round to beat her Estonian opponent 6-3 2-6 6-3. It was No. 5 Elina Svitolina who welcomed Bertens in their quarter-finals match-up, but the Dutch soared into victory in two-sets, 6-4 6-3. Even the queen of offense, No. 8 Petra Kvitova, couldn't seal the deal as she moved on to the final round to set the clash with Simona Halep by beating the Czech from one set down, 3-6 6-4 6-2.

It is worth noting that Kiki Bertens beat the World No. 1, 2, 5, 8, 23 and 28 to conquer the title in Cincinnati, also known as the Western & Southern. She was  only a ranking away to find herself as the 16th seed in the draw, but that didn't stop her to put the biggest challenge of her career. With her recent performance, Kiki Bertens sure is going to be one of the players to look into for the next week's US Open, the last Grand Slam of the year, with her motivation peaking its top along with the $530,000 cheque she got as the winner of the title.