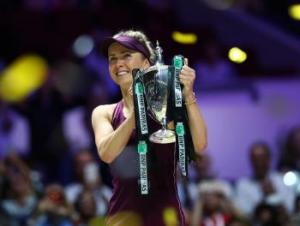 The journey in Singapore has finally come to an end after five years of being the host-country, so for the players to close the season and relax after an eventful year. The Top 8 of Porsche Singles Race, except Simona Halep due to on-going injury, have all made it to the big stage to best the WTA Championships for 1500 points and approximately 2.36M paycheck if undefeated in Round Robin.

Next Stephens and Svitolina, Pliskova and Bertens joined as the number two of their groups for semi-final clash, and they were ready for the challenge as ever. Sloane dropped the first set to her Czech opponent 6-0, and was behind 2-0 40-15 until Pliskova got broken on her serve. It wouldn't be right to say Sloane was on her day, though it does not change the fact a single bit her amazing defensive skills and footwork deserves a credit to turn the matches around. The American reached her very first finals of WTA Championships, sending the Czech to her home 0-6 6-4 and 6-1. It wasn't a walk-in-the-park for Svitolina either as the Dutch, Kiki Bertens, put her heart and soul to finish 2018 as her best year. Unlike Sloane however, Elina played extremely consistent throughout the whole tournament; both defensively and offensively, and surged into the final 7-5 6-7(5) 6-4 to set up the final meeting.

This year, Sloane beat Elina in Montreal's semi-final round 6-3 6-3. Plus, Elina's offense does not generate enough power to hit winners against Sloane so, I personally thought the American would have had the upper-hand, forcing her opponent to do errors which seemed to be the case until the first set on her favor; 6-3. Instead, the score slowly faded away as the Ukranian became better and better with her excellent shot-making, recovering from the situation while the American puzzled. In 2:22 hours, Elina Svitolina reached her first WTA Championships title by beating Sloane Stephens in three-sets; 3-6 6-2 6-2.

WTA released a clip about Elina Svitolina's accomplishments in 2018 soon after she won the Championships, as she won the first and the last tournaments of the season: Brisbane and Singapore, and raising four thropies in total including Dubai and Rome. Being unbeaten in Round Robin as well (3-0), she closed the season with the maximum cash the YEC offers: $2.36M, as well as 1500 brand-new points to start the 2019 season as the fourth in the world.

Shenzen, China will be the next host-country for the WTA Finals to hold the competition for the next ten years starting from 2019 to 2028 as Singapore's successor.