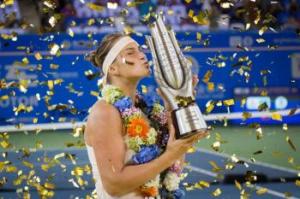 Aryna Sabalenka, the 20 year-old Belarussian, continues to be a huge threat to her opponents as she wins her second title in 2018 by beating the Estonian Anett Kontaveit in straight-sets; 6-3 6-3 to conquer Wuhan. Since June, Sabalenka has only lost 7 matches out of the 32 she played in the summer season, with 7 of them against the Top 10, as well as won her first title in New Haven in August.

Sabalenka's raw power, which seems way consistent right now than it was before, makes her an outlier in the inconsistent situation WTA players are in, and that only means a huge plus for her. If she goes in that direction, there is no doubt we will see her as the future contender of Grand Slams just like Naomi Osaka. Aryna's path to victory began with her first round win against the Spainard Carla Suarez Navarro, whom she played against in the finals of New Haven, 7-6(2) 2-6 6-2. In the second round, she dispatched the No. 6 Elina Svitolina 6-4 2-6 6-1, qualifier Sofia Kenin in the third with 6-3 6-3, Halep-slayer Dominika Cibulkova in quarter-finals 7-5 6-3 and Ashleigh Barty 7-6(2) 6-4 in semi-finals to book her spot against Anett Kontaveit in finals.

What makes Sabalenka a threat to the other players? Aside her raw power, her serves are one of the strongest in the tour right now, which she shares this attribute with Serena Williams and Naomi Osaka as the active players. During the final match, she won 78% of the first serves she landed on her opponent's court, which is considered pretty high for women's tennis. Especially in a tour where holding your serve makes a major impact on the scores, Aryna does that pretty well. We are yet to see the better of her in the future, and we might be witnessing the future star of the WTA.

As Sabalenka won Wuhan, she got brand new 900 points under her belt and half of a million cheque as she makes her way to Beijing. She will rise to the 16th in the world; 4 ranks above than she was previously ranked as 20th.