Streaks Have Been Broken: Federer and Sharapova Out 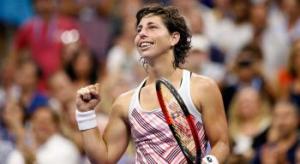 Under the glittering lights of Flushing Meadows, Maria Sharapova and Roger Federer are outclassed by their opponenents, Carla Suarez Navarro and John Millman. Sharapova's 23-0 night session streak now has come to an end by the Spaniard while Federer's 40-0 against players out of Top 50 is snapped by the Aussie.

Carla Suarez Navarro had an amazing 30th birthday night beating the Russian 6-4 6-3 on Arthur Ashe. She recently played finals in New Haven; a preperation tournament for US Open, beating the likes of Caroline Wozniacki and eventually falling off to the winner, Aryna Sabalenka. The Spaniard, also, showed to the audience that she is ready and on form by beating the No. 6 Caroline Garcia in the previous round despite being considered as an underdog coming to the fourth round. In a balance exchange of 15 winners from both women, it was Sharapova who led the unforced errors by a giant margin with 38 compared to her opponent's only 20. With the loss, Sharapova has never seen a quarter-final round ever since she won here in 2006 except 2012's semi-final against Victoria Azarenka.

As if the Arthur Ashe hasn't shaken up from Sharapova's loss yet, the other came from the Swiss Maestro, Roger Federer, bowing out to the Aussie John Millman in four sets. Despite the Swiss took the first set 6-3, Millman soared with his game to next level to win the rest three. He played aggressive, fearless and didn't give Federer a chance to use his set points in the third set and his game advantage. After three hours and thirthy-four minutes, the Aussie stunned the Swiss 3-6 7-5 7-6(7) 7-6(3) to make it to the quarters, also leaving the Swiss with a bitter taste of breaking his 40-0 chain.

The highly anticipated match between Djokovic-Federer QF round, also, left the fans dark in the corner with Millman's win, who is now Novak's opponent. Carla Suarez Navarro will welcome Madison Keys as her quarter-final opponent, whom the previous year's runner-up beat Dominika Cibulkova in straight sets, 6-1 6-3.