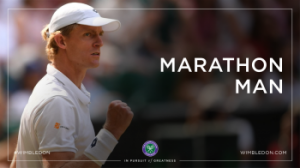 Kevin Anderson, nicknamed as the Marathon Man of Wimbledon in 2018, does it again as he knocks John Isner out of the tournament in an epic battle, 7-6 6-7 6-7 6-4 26-24. The match lasted for 6 hours and 36 minutes, going down as the longest semi-final match of the tournament history. Anderson had to tough the match out against Federer to the fifth set in previous round, eventually coming as the victor 13-11 in the final set.

John Isner, however, is not a stranger to long-lasting matches. He is the current record holder of the longest match in the history as the player, along with the French man Nicholas Mahut, in Wimbledon 2010. Scheduled in three days, the duo had to play 11 hours and 5 minutes to complete their first round match 6-4 3-6 6-7 7-6 70-68 where Isner came out on top. Both Isner and Anderson are known to be big-servers in the tour, holding their first serves with high percentages and firing aces one another, so the match was heavily speculated to last long from the start.

Tie-breaks were close; 8-6 for Anderson's favor and 7-5 for Isner's respectively. In the third set, Anderson took the early lead and broke Isner's serve to 5-3, but couldn't hold his serve to forge ahead 2-1 in sets. Isner broke and took the momentum to carry the set to yet another tie-break where multiple set points were exchanged, and eventually won the set to leave Anderson with slightly bitter taste. When it comes to both players, the way they demonstrate their technique are quite similar so, the game, sets, even the winner of the match, is only determined by one or two significant points. Breaking ones' serve was the most important factor to win the match, and surely Anderson did it in the fourth to even the sets 6-4.

The 50 game long last set was all in John Isner’s favor as he had the serve advantage, while Kevin Anderson had to serve to stay in the match consecutively after 6-5. Knowing each others’ game inside out didn’t help either, as the duo had played many matches since their first challenge in the American College Tour and friends since teens. In 20-20, it was John Isner who started to break down and struggled in rallies; going for direct shots to hit winners, but didn’t work out in the end as Anderson remained solid from the very beginning as if he would play the match with the same pace until the night. He finally broke Isner’s serve to lead 25-24, later holding his serve to conclude an epic match to reach his first finals in Wimbledon after six-and-half hours.

With the victory, Kevin Anderson became the only South African to reach Wimbledon finals in 97 years after Brian Norton’s success back in 1921. The match will be Anderson’s second Grand Slam final in his career in less than 12 months, who lost the US Open finals to Rafael Nadal in straight sets last year. The final opponent will be decided in a match between multiple Grand Slam holders, Rafael Nadal and Novak Djokovic.