Caroline Knocked Out by Makarova, Joins The List of Early-Exit Seeded Players 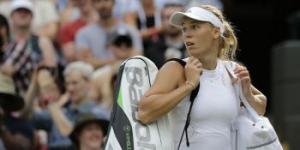 I had a brief dejavu when Caroline returned back from four match points down to even the match at 5-5, while her oppononent Ekaterina Makarova was leading 5-1 in the third, and had three match points at 5-3, 40-0, later an advantage point at AD-40. After all, Caroline defended the similar points in 2R of Australian Open 2018 against Jana Fett while she was down 5-1 40-15 in the third set, won the match 7-5, and eventually went on to win the championship to capture her maiden slam.

Caroline came here winning Eastbourne and was on her form, although her performance in Wimbledon has never been remarkable. The Danish player's best result is 4th round since her participation to Wimbledon in 2007, excluding she was the junior Grand Slam champion here in 2006 before going Pro. However, Caroline isn't the only player leaving the tournament with a disappointing result. She now joins the faller of seeded women players alongside the likes of Petra Kvitova, former Wimbledon champion of 2011 and 2014 who came here conquering Birmingham to get her the fifth title of 2018 in overall, Sloane Stephens (4), Elina Svitolina (5), Caroline Garcia (6), Coco Vandeweghe (16), Magdalena Rybarikova (19), Anastasia Sevastova (21), Maria Sharapova (24), Anastasia Pavlyuchenkova (30), Shuai Zhang (31) and Agniezska Radwanska (32). Out of the seeded players, Sloane is the runner-up of French Open 2018, Elina and Caroline Garcia have shown strong commitments to the tour events to obtain successful results, Coco and Magdalena are former semi-finalists, Maria Sharapova is the former champion of 2004 and Agnizeska Radwanska is the runner-up in 2013.

Ekaterina Makarova, who split up with her former long-time double partner Elena Vesnina while the duo was about to become the World No.1 after conquering Madrid, is now marching on to the third round of Wimbledon having beat Caroline Wozniacki 6-4 1-6 7-5, and will face against Lucie Safarova.