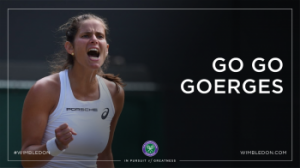 Julia Goerges goes into her first semi-finals in a Grand Slam, defeating Kiki Bertens 3-6 7-5 6-1. She joins Jelena Ostapenko, Angelique Kerber and Serena Williams as the last player to secure her place in the Last 4, with only exception that the German is the only woman who doesn't have a Slam under her belt compared to Ostapenko's 1, Kerber's 2 and Serena's legendary 23.

The former French Open 2017 Champion Jelena Ostapenko became the first woman in Last 4 to write her name in the semi-finals bracket, beating Dominika Cibulkova 7-5 6-4 to dispatch the Slovak out of the tournament. The former runner-up of Wimbledon 2016, Angelique Keber, became the second woman to book her ticket to the next round, knocking out Daria Kasatkina of Russia 6-3 7-5. In the last day of the match, Serena Williams, despite having a sturggling start against the Italian Camila Giorgi, emerged the victory in three-sets; 3-6 6-3 6-4.

Jelena Ostapenko and Angelique Kerber will fight for a spot in finals to add the Venus Rosewater Dish to their throphy list for the first time, while 7-time Wimbledon Champion Serena Williams will welcome the newbie of semi-final, Julia Goerges, in an attempt to complete her return in success. Both semi-final matches will be played in Centre Court on Thursday.