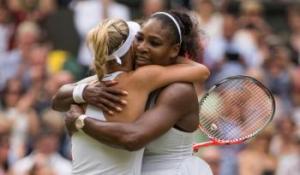 A dejavu awaits for the final round of Wimbledon, as Serena Williams and Angelique Kerber surge into the last two and will wait Saturday for their re-match to accomplish the mission. In 2016, Serena beat Angelique in her dream year to reach her 7th Wimbledon title, 22nd in overall, in straight sets 7-5 6-3. It was, also, the last time Serena played in Wimbledon before pausing her career for maternity leave. Kerber on the other hand, lost against the eventual champion Garbine Muguruza in fourth round last year 6-4 4-6 4-6.

In today's first match, Angelique Kerber stopped Jelena Ostapenko 6-3- 6-3 despite having a slow-start to the match. The Latvian seemed to dictate the rallies and put the ball on corners with effective shots, however couldn't turn the chances into opportunities. Kerber, unlike Ostapenko, converted these chances into points to lead the set(s) with a break advantage. Even though the Latvian attempted to recover from 5-1 down in the second set and found opportunities to even the set, her attempts failed with yet another unforced error, handing the match to Kerber. 36 unforced error against a defensive counter-puncher Kerber is just too much at this point and surely it didn't help against her opponent who only had 7.

Serena Williams relatively had a comfortable day, leading 5-2 in both sets and managed to close the match 6-2 6-4. Julia Goerges broke Serena in the second to even the set 4-5, but couldn't hold her serve in the end. Serena played clean from the start, scored 16 winners compared to her 7 unforced errors, and knocked out the German with 20 points ahead in total. The odds-favorite once again displayed an excellent performance that as if she has never left the courts. She is as good as ever.

Serena has beaten Kerber 6 times in their 8 meetings, but it is important to note that one of her losses came in a Grand Slam final in Australian Open 2016; Kerber's maiden-slam. Beating a player like Serena Williams in the finals is not an easy task at all, though Kerber managed to overcome it and surged into her first slam victory 6-4 3-6 6-4. Their last meeting was here in Wimbledon 2016, in the final round once again, which Serena came as the victor 7-5 6-3 this time.

Who is going to win? I say Serena. Both players have excellent command of their techniques on grass-court, but Serena has shown a strong dominance in overall and played a very consistent tennis throughout the tournament. Kerber will seek for a revenge to claim her first Wimbledon title, though Serena will be on the court calm and collected to go down in history for the eighth time.