Is Lansdorp the Key for Bouchard? 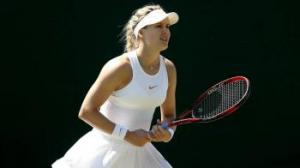 For almost more than 24 months, the former Top 5 player Eugenie Bouchard couldn't manage to win more than four matches in a row, which she finally broke the chain in Wimbledon 2018 after making her way to the 2R of the tournament through qualifiers. However, she lost today to Ashleigh Barty (17) in straight sets, 6-4 7-5, despite leading 5-2 in the second and having a set point on hand. The current No. 188 is a former runner-up in 2014; losing the title challenge against Petra Kvitova and a former semi-finalist in Australian Open and French Open in 2014.

However, Bouchard quickly fell off from her form after 2014 and barely manage to obtain successful results to keep her as a seeded player, and slowly faded away from the ranking list. The issue about Eugenie, however, is that she didn't undergo an important surgery or went through an illness to put her career on-hold unlike former No. 7 Belinda Bencic, who similarly suffered from the immediate ranking drop due to her wrist surgeries and is unseeded here in Wimbledon. The question about Bouchard not paying the necessary attention to her tennis career stuck to public's mind for a long time, as her celebrity endorsements are fascinating compared to the prize money she collected in the past few years from tour events.

Bouchard makes her training at Patrick Mouratoglu Tennis Academy, a sport complex highly associated with Serena Williams and her famous coach, Patrick Mouratoglu. And, the news about her seeing yet another famous coach, Robert Lansdorp, is exciting. If you read Maria Sharapova's book, Unstoppable, you must have heard about Lansdorp and how she effectively improved her hard-hitting baseline game while working together with him when she was a junior. Maria specifically states that she heard about Lansdorp being the former coach of Pete Sampras, Lindsay Davenport and Tracey Austin; the hard-hitting champions of the tour in 90-00's, and soon got to know him in person.

When asked, Lansdorp says: "I feel I can help her get better." about her new student. Despite the tough loss today, Bouchard promises positive signals for the future and takes important steps to revive what was dead inside her for a long while.