Is Serena Ready for the 8th Wimbledon Title? 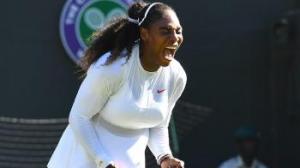 It was not so long ago that Serena had to retire from the French Open due to arm injury, just 20 minutes ago before the tournament's most anticipated 4th round match between her and Maria Sharapova. Despite it left a bitter taste for fans, both her being unable to compete and witness the clash of titans after their wildly-speculated last encounter in quarter-finals of Australian Open 2016 — the last match Maria Sharapova competed before facing a 1.5 year of drug suspension — the real question remains: Is Serena Williams actually ready to take on the 8th Wimbledon challenge and be the victor?

As an all-time Serena fan, I have to say Serena didn't give a promising start in her first round, beating Arantxa Rus of the Netherlands in straight sets, 7/5 6/3. Regardless, it would be unfair to exclude the weather conditions and how wind affected almost all players in Day 2, which in my sincere opinion, dispatched Kvitova out of the tournament. Groundstroke-wise, Serena was on point, but still can't say the same when it comes to her physical condition. Her second round opponent is going to be Viktoriya Tomova from Bulgaria, who managed to make her way to the main draw through qualifiers and beat Tereza Smitkova of Czech Republic 7/6(3) 6/1.

On paper, it isn't likely at all to consider a possbility that Serena Williams loses in the first rounds of a Grand Slam unless very few exceptions such as her loss against Viriginie Razzano in 1R of French Open 2012; the only 1R loss of the American, and Garbine Muguruza in 2R of French Open 2014. The Spaniard reached the QF of the tournament later on, losing to the eventual champion Maria Sharapova, but proved her worthiness in the upcoming years to become the top-ranked player and even beating Serena Williams in their final round encounter in French Open 2016 to earn her first Grand Slam throphy. When all are taken into account, the years of experience and the Serena 'brand' comes off just too powerful to her youngster opponents.

Serena Williams and Viktoriya Tomova will play on Center Court as the third match after Roger Federer versus Lukas Lacko.