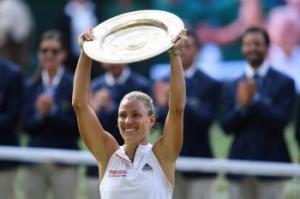 Angelique Kerber displays outstanding performance against Serena Williams to win her first Wimbledon in straight sets, 6-3 6-3. She becomes the second German to win the title in twenty-two years after Steffi Graf's victory back in 1996. Kerber, who now holds Australian Open, Wimbledon and US Open thropies under her belt, will rise to the fourth spot in the WTA rankings on Monday.

How did Kerber beat Serena? The answer is simple: Strategy. She had the strategy to keep the ball in rally and let Serena play as many points as she could — to a point she eventually makes an unforced error. Such strategy may work against the offensive players like Ostapenko, Giorgi, Goerges, but to an opponent like Serena, it is gamble. She is the victor of 23 Grand Slams out of the 30 finals she played in total and experience just comes too heavy for those who face the legendary icon on the opposite side of the court. Not this time, however.

It is important to emphasize the fact that Kerber only made 5 unforced errors against Naomi Osaka in second round, 7 to Jelena Ostapenko in semi-finals and both players are well-known for their offensive style. To Serena Williams? Only 5, and 3 of them were just made in a single game in the first set compared to Serena's 24. Just incredible. She has just been nothing but a wall that returns every ball and embitter her opponents in each round. Today was no different, as Kerber played as comfortable as she can, completely negating Serena's experience on court. Kerber, both in Australian Open and Wimbledon, and Garbine Muguruza in French Open, are the only players I have seen playing so fearless against Serena on finals and the results surely come in handy for them.

Still, it is Serena's fourth torunament back after her pregnancy and expecting such a result shouldn't be very disappointing. Yes, we already know how she plays in finals and she just doesn't lose when it is about getting the titles, but that loss could only mean she will ignite the fire deep inside her to leave rest of the players in dust in the upcoming months which is a good thing. Serena has that passion that no one has; the feeling to compete, to win, to be the best. These are the attributes that define her. As a Serena fan myself, I'm looking optimistic to the future.

Well-played two weeks here in Wimbledon for Angelique Kerber. Did she deserve it? Yes, she absolutely did. And, Venus Rosewater Dish looked good on her as well. As for Serena, I just can't wait to write her many-to-come victories and hopefully to forget the final like she did the runner-up plate on her chair today.