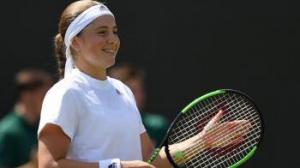 After an eventful day, we now have the last eight women booking their tickets in the quarter-finals. They are, from top of the bracket to the bottom, Dominika Cibulkova, Jelena Ostapenko (12), Daria Kasatkina (14), Angelique Kerber (11), Kiki Bertens (20), Julia Georges (13), Serena Williams and Camila Giorgi. All quarter-final matches will be played tomorrow.

Kiki Bertens (20) ends Top 10's dreams to conquer Wimbledon, beating Karolina Pliskova (7) 6-3 7-6, the last Top 10 contender in the draw, and will play against the No. 13 seed Julia Georges. Dominika Cibulkova ended Su-Wei Hsieh's run in straight sets, 6-4 6-1, who beat the top seed Simona Halep in the previous round. Her opponent will be the 12th seed Latvian, Jelena Ostapenko. The Latvian survived the first set being down 0-4, later on 2-5, and had a penalty for getting on-coach advice despite she claims it wasn't the case. In her interview with Barbara Schett of Eurosport, she stated the situation got her motivated to turn over the first set and win the match. She beat the Belarussian Aliksandra Sasnovich 7-6(4) 6-0 to meet Dominika in quarters.

The clash of mothers was in favor of Serena Williams, knocking out the Russian mother Evgeniya Rodina 6-2 6-2 in straight sets. The current odds favor and former 7-time champion will face Camila Giorgi in her quarter-final match, who beat Ekaterina Makarova in fourth round. In second round, Makarova dispatched Caroline Wozniacki (2) out of the tournament. Daria Kasatkina (14) and Angelique Kerber (11) is one of the matches to definitely keep an eye out. The duo last played in Eastbourne, a preperation tournament to Wimbledon, and Kerber beat Kasatkina in a tight three-set thriller. Their match is the first to be played in Center Court at 1.00PM BST.

My winners for tomorrow are Serena, Kerber, Ostapenko and Bertens. In my previous post, I got 11 out of 16 correct, but also specifically mentioned how unpredictable some results can be due to players' game styles and the surface being grass. Such as, Monfils versus Anderson, that I thought Monfils could win, but in the end it was Anderson who was victorious 7-6 7-6 5-7 7-6. In women's quarters, the same case might apply here. I can see Serena and Kerber very likely to book their spot in the semi-finals, but Cibulkova and Georges will put up quite a challenge to Ostapenko and Bertens. Can't Tuesday just come sooner?