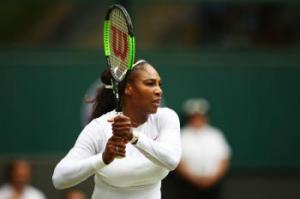 Venus Williams exits Wimbledon after a fierce match between the Dutch Kiki Bertens 2-6 7-6(5) 8-6 while 7-time Wimbledon Champion Serena Williams is crowning her return with yet another 4R, beating the French Kristina Mladenovic 7-5 7-6(2). Venus (9) and Madison Keys (10), who also lost her match to the Russian mother Evgeniya Rodina 5-7 7-5 6-4 today, joins the group of Top 10 players missing the second week. Both Simona Halep (1) and Karolina Pliskova (7), the only women left in Top 10, will have their matches tomorrow against S-W Hsieh and Mihaela Buzarnescu respectively to book their tickets for the second week.

Serena's 4R opponent will be Evgeniya Rodina, the Russian mother who beat Madison Keys in three sets, while the possible quarter-finals opponents will be either Camilla Girogi or Ekaterina Makarova. With the draw narrowing down each round, Serena's odds to win the tournament is increasing, given her impressive performance against Mladenovic today. Still, it is not easy to anticipate a clear winner of the tournament when the inconsistency of WTA players are taken into account. And, you cannot dismiss the likes of Angelique Kerber, Jelena Ostapenko, the former Grand Slam champions whose play styles fit grass.

To note: Since 'Middle Sunday' exists in Wimbledon, meaning no play is happening on that date, Serena is progressing directly to the second week without having to play her fourth round match this weekend.