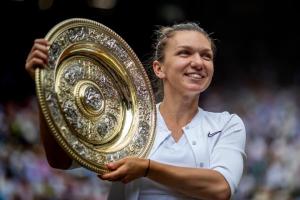 Serena Williams is on her third consecutive Grand Slam final loss, this time against a flawless Halep, who only did three unforced errors to claim Wimbledon 6-2 6-2 in 56 minutes compared to Serena's twenty-seven.

For what she has called as 'chill year', Simona Halep managed to capture Wimbledon and the hearts of Romanians in the past two fabulous weeks. According to Halep, her performance in the third round against former World No. 1 Victoria Azarenka (6-3 6-1) boosted her confidence to go for the title, as well as her strong desire to get the full-membership of All England Lawn Tennis and Croquet Club, where it is mandatory for players to win Wimbledon in order to be a life-long member.

The match last unexpectedly short. Serena Williams felt frozen once again on the court; even worse compared to the previous two; couldn't fire a single ace in the first set and made 27 unforced errors that is almost exactly 'nine' times more than her opponent, whereas Simona Halep held the grip tight and displayed perfect consistency to finish the match within an hour. The Romanian, who played semi-finals here in 2014, has now managed to get her second Grand Slam title after last year's Roland Garros.

As for Serena, it seems she has deep down concern during finals, something we've never seen from her which I'm personally tieing it for being a mother and having the whole world's attention to break Margaret Court's 24 Grand Slam title record at the age of 37. It is possible, but she showed almost no presence at all in both Wimbledon finals, as well as last year's controversial US Open final. Granted, the players she faced were the best of their tournaments, but it must be the time for Serena to play and train more in pre-Grand Slam tournaments to gain momentum and close the gap with the other tour players. That is the only way she can compensate the lack of tour-level matches.