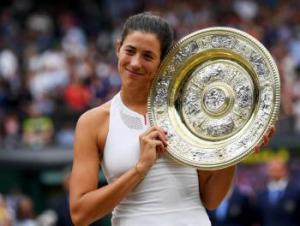 Garbine Muguruza is knocked out in 2R by Belgian Alison Van Uytvanck in three sets, 5-7 6-2 6-1. The Spaniard was the conquerer of the title here last year by displaying an oustanding performance, beating 5-time champion Venus Williams in straight sets, 7-5 6-0. With Garbine's defeat, only 4 players from Top 10 surges into the third round: Simona Halep (1), Karolina Pliskova (7), Venus Williams (9) and Madison Keys (10). Among the players, Simona has just recently won her maiden slam in French Open, Karolina is the former US Open runner-up in 2016, Venus Williams has won Wimbledon five times and Madison is the US Open 2017 runner-up.

Though, it seems like Belgium's strong performance in World Cup somehow spreaded to their tennis players, as we see three Belgian players in the third round: Elise Mertens (15), Australian Open semi-finalist, Yanina Wickmayer, former World No. 20, and Alison Van Uytvanck, knocking out the defending champion. If Kristen Flipkens could have beaten Jelena Ostapenko today, she could be added as the fourth to the list. Strong opponents await Belgians in the next round; Dominika Cibulkova, Donna Vekic and Anett Kontaveit respectively.

It is a disappointing result for Garbine for sure, as it was for Ostapenko when she lost in 1R while defending her title in French Open. It is unclear yet how the rankings will shape up, but the Spainard is going to lose a lot of points and weaken her third spot after the tournament.