What To Expect in Second Week? 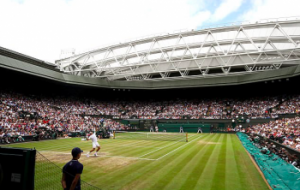 The second week of Wimbledon starts tomorrow, but what matches should we be looking for as we reach closer to the finals next weekend? To remind, the only Top 10 continuing her dream in ladies' draw is Karolina Pliskova (7), while Roger Federer (1), Rafael Nadal (2), Juan Martin Del Potro (5), Kevin Anderson (8) and John Isner (9) made their way into the second week in gentlemen's side. Among them, the draw includes Serena Williams and Novak Djokovic as well despite not being in Top 10.

Roger Federer (1) will face Adrian Mannarino (22), the runner-up of Antalya Open 2018 recently, who also plays his best game in grass. Gael Monfils has shown incredible skills, as very much expected from him, to beat Sam Querrey (11) in third round and will now face Kevin Anderson (8) in fourth round. Monfils came here with a strong form, playing semi-finals in Antalya Open. Milos Raonic (13), former Wimbledon runner-up, is to face Mackenzie McDonald whom I can call as a surprise name in the draw. John Isner (9) will play against Stefanos Tsitsipas of Greece (31). Novak Djokovic (12), ending the Brit Kyle Edmund's dreams in four set tough battle will be Karen Khacanov's opponent, who beat Frances Tiafoe in five-set thriller, emerging victory from two sets down. Kei Nishikori (24) versus Ernests Gulbis will be one of the matches to look at, who beat Nick Kyrigos and Alexander Zverev (4) respectively to set up their clash. Juan Martin Del Potro (5) will be up against Gilles Simon and finally, Rafael Nadal (2) will face Jiri Vesely.

In ladies' draw, you can see SW. Hsieh replacing Simona Halep after her victory on top of the bracket against Dominika Cibulkova. Jelena Ostapenko (12) will see Aliksandra Sasnovich as her opponent, who knocked out two-time Wimbledon champion Petra Kvitova in first round. Another surprise name for me, Alison Van Uytvanck, will be playing against Daria Kasatkina (14). Angie Kerber (11) seems to be on her form, beating Naomi Osaka (18) and set up the clash between Belinda Bencic, a former Top 10 player who suffered from wrist issues and dropped from the ranking significantly in last year. Karolina Pliskova (7), the only Top 10 contender in the draw is up against Kiki Bertens (20) who survived three-set thriller match against Venus. Donna Vekic, who keeps blooming and leveling up her game to be a better player each year, will be Julia Georges' (13) opponent. Georges, also, survived a three-set thriller against Barbora Strycova. Supermoms, Serena Williams and Evegniya Rodina, set up the battle in fourth round after beating Kristina Mladenovic and Madison Keys in their previous round. Finally, Ekaterina Makarova and Camila Giorgi is the final fourth round match on bottom of the bracket. Makarova came into the fourth round after emerging victorious in her battle against Caroline Wozniacki (2).

I think Roger, Rafa, Novak, Del Potro, Monfils, Raonic, Isner, Gulbis are very likely to reach quarter-finals in men's side and Serena, Cibulkova, Ostapenko, Kasatkina, Kerber, Pliskova, Vekic and Makarova from the women's. While most of them are predictable, some are so evenly-matched that you can't anticipate a clear winner. Regardless, the second week promises great battles to hook up on TV and I, personally, cannot wait for it.