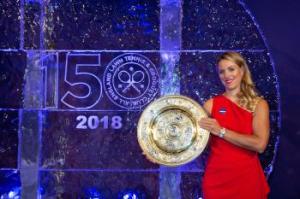 The grass court season has officially come to an end after Angelique Kerber's majestic performance against Serena Williams on Saturday's Wimbledon final. We now have the weekly WTA rankings officially updated as we approach the next week, listing important rank changes as many favorites dropped in the first week of the tournament, including the former semi-finalists.

Angelique Kerber returns back to Top 5, finding herself on the 4th spot with Wimbledon title, while the defending champion Garbine Muguruza's early exit in the second round costs her more than thousand points to fall back to 7th. With that, an interesting ranking structure shapes up as the Top 4 players are now the current champions of Grand Slams: No.1 Simona Halep (French Open '18), No. 2 Caroline Wozniacki (Australian Open '18), No. 3 Sloane Stephens (US Open '17) and No. 4 Angelique Kerber (Wimbledon '18).

Despite losing in the first round, Sloane Stephens didn't suffer from any points as she played first round here last year when she returned back from injury leave. And, that certainly helped Sloane to achieve her career best ranking, the third spot, as all players from the Top 10 failed to make it to the second week, thus failed to protect their points. Julia Goerges' returns back to Top 10 after achieving her first maiden semi-final in a Grand Slam, replacing Kerber's old ranking. Among the other rank-movers, Kiki Bertens moves three spots to start the week as 17th, Dominika Cibulkova as 26th, Camila Giorgi jumps 17 ranks to be 35th, Su-Wei Hsieh as 37th, Alison Van Uytvank as 40th and Aliksanda Sasnovich as 41st. Leaving the legendary icon, Serena Williams, to the last as the Wimbledon runner-up moves 153 spots ahead to find herself as the 28th in the rankings.

2018 marks an historic year for Wimbledon, as none of the Top 10 were qualified for Round 4 or ahead. Former semi-finalists, also failed to make it to the second week. I mentioned about Garbine Muguruza's loss in the second round; placing her as 7th, in the first paragraph. What about the other semi-finalists? Venus Williams is the only semi-finalist from last year to achieve the best result; third round, losing Kiki Bertens in a three-set thriller. Venus, who was the 9th seed, couldn't find herself a spot in Top 10 and dropped back to 14th. Magdalena Rybarikova is now No. 31, formerly No. 17, dropping 12 ranks. However, the huge hit came from home-favorite Johanna Konta. The Brit who was seeded as 24th in Wimbledon is now out of Top 30 and is ranked 50th in the world.